Never miss a great film with this Scrapy tutorial

A large issue with learning to program is first working out what is even possible to achieve; and this is made all the harder by the prevalence of math problems or little puzzles in tutorials which have no direct link to the how they’d be used in the real world.

Programmers love these but I remember the deep frustration myself: “why can’t I just learn something useful?“.

Hi! I'm Darian, a software developer based in London, and I teach my readers here at Hexfox to automate the repetitive tasks that would otherwise suck hours out of their life, with the aim of preparing them for a future world where automation is king. Sound interesting? Stick around or sign up!

I, like most people, tend to learn best when I have a certain goal in mind, because reaching that goal feels like an accomplishment and fuels the mind to go deeper. In fact, it’s how I ended up here after a 10 year journey down the rabbit hole (pro tip: it never really ends, just keep digging).

“Every great developer you know got there by solving problems they were unqualified to solve until they actually did it”. - @patio11

A fantastic quote but what if you don’t know what to solve? Yeah, that’s really common! This is where I come in..

This post is designed to showcase just how much the world of possibilities opens up once you learn a certain skill called web scraping - the industry term for “extracting data from the web”.

What we’re going to do today

We’re going to write a script, actually make that two scripts, for a fun home project that will check your local cinema’s film listings every day and email you only if is is showing a film that receives a high rating on IMDb. Because who the hell wants to pay top dollar for yet another shoddy film? At £20 ($28) a ticket in London, it’s certainly not fucking me I’ll tell you that..!

So here is the linear flow we’ll be following, deliberately split up into bite-size manageable chunks: 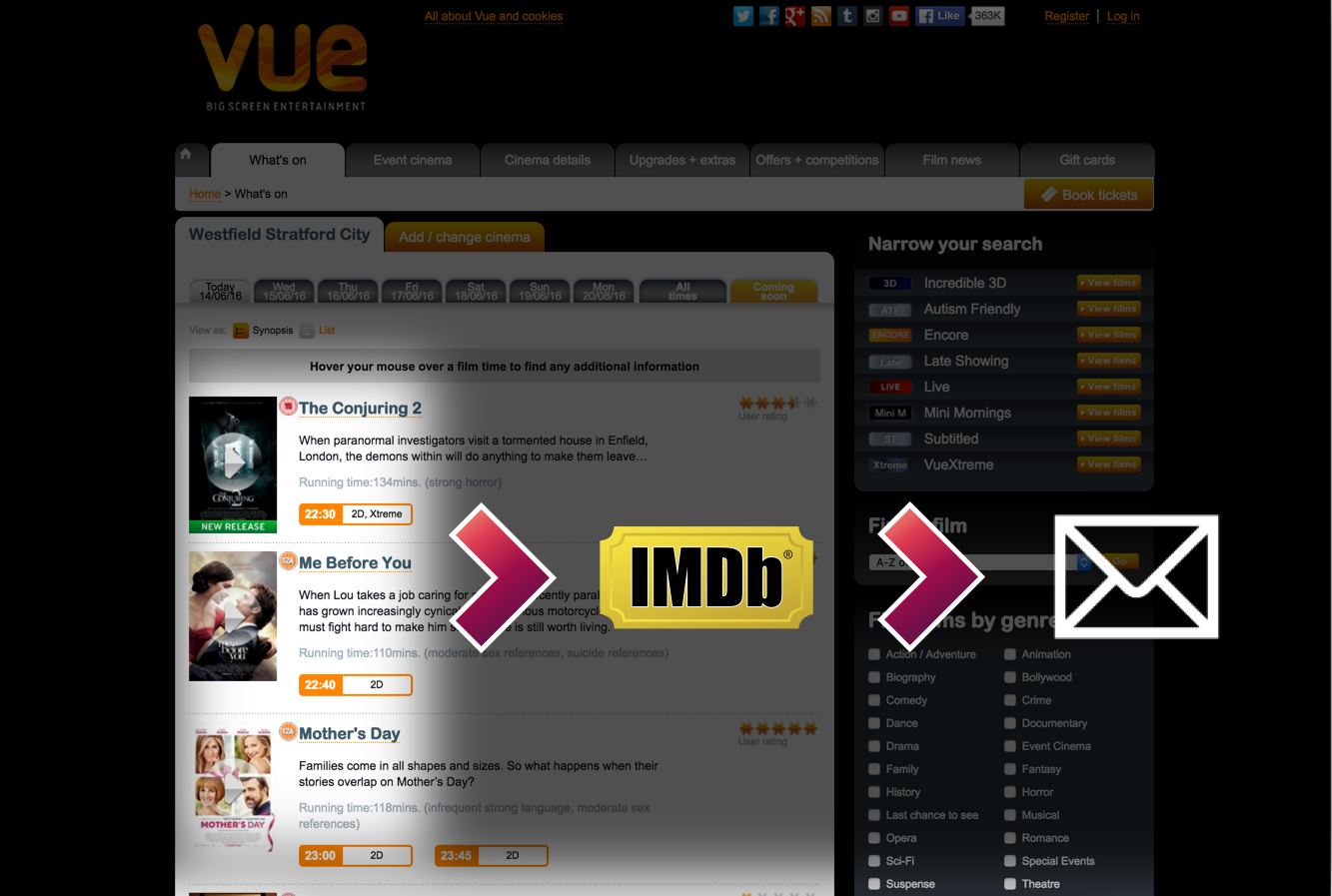 I have released the code for this post under a free open source license, if you’d like to get it and follow along, or edit the script to work better for you then I’d really encourage that; simply place your email in the box below and my army of robots will send you the zip instantly. You’ll also get weekly updates from me with future posts like this, and further web scraping tips and tricks written specifically with the aim of saving you countless hours of furious clicking around the web looking for answers.

As I said - we’re going to split this up in to 2 scripts: one that actually visits the local cinema’s website to get the data and the other that takes the retrieved data and checks it against IMDb before sending the daily email.

Why separate out such a simple script? It’s a good practice to get into in the world of development, as Doug McIllroy said: “Make each program do one thing well”. By separating out our concerns we automatically achieve a number of advantages:

But how will the 2 scripts talk to each other? Well, just like we humans do: via the medium of text! The first script will save a file in a certain format that the 2nd script knows how to read, simple as that. The format we’ll use to save the results to is called JSON, an incredibly common data interchange format on the web. It allows us to read and write data in a way which can be read by the human eye too, but that is all you need to know for now.

Let’s describe a few of the tools we’ll be using before we get started. Unfortunately, installing these is out of scope for this article but if you get the code I have written instructions in the README which should help you get going.

We’ll be using the Python programming language due to it’s wide ecosystem for web scraping; I’ve written about why I think Python is the best beginner language for web scraping so pause reading this if you’d like a bit more background.

If you’re on Linux or MacOSX, the code will work on Python 2.7 or Python 3.5. If you are on Windows, Scrapy does not support Python 3 just yet, but hopefully this will change in the near future, keep an eye on this ticket.

In most programming languages, there are tools on the internet in the form of “packages” of code that other people have written. We can use these packages to greatly speed up our development. Today we’ll be using:

These packages are all installed from the Python Package Index, you can check out the README in the code zip for install instructions.

With that over - let us begin, padawan.

We’re going to build the web scraping part first; this is the script which will visit local cinema website as if it were mimicking a web browser and then extract certain elements from the page before storing them to a JSON file.

You can read this entire file in the code zip as cinema_scraper.py.

That is it in its entirety and I hope you can see now why I chose Scrapy for this very simple task; we’ll talk about what it abstracts away from us later but for now you only need to know that it does this so that we can concentrate on the core problem at hand: extracting that data.

Let’s go through it line-by-line starting with the import. Python consists of modules which are basically packages containing code, they exist on the filesystem as simple directories full of *.py files. By importing the scrapy module as we do here, we get to use it’s all the web scraping goodness that lies within.

So the first job of the day is to define what Scrapy calls our “Spider class”. If you’re not familiar with classes, they can be thought of as a factory that output objects. If that is complete moon language to you, then fear not and press on as it doesn’t really matter what they are now provided you follow these instructions.

When the scraping job is kicked off, Scrapy will take this “Spider class” blueprint we’ve written and use it to generate an object in memory that knows how to scrape the cinema website. We’ve called it CinemaScraper; the bit in brackets (scrapy.Spider) denotes that we are sub-classing the default spider that Scrapy provides for us. Sub-classing is also a topic for another day but you can take it to mean that our spider inherits all the features of the default spider that Scrapy provides. By doing that and overriding certain bits we can make it do whatever we want.

Immediately under the class definition, we define a bunch of attributes; these are variables which exist at the top-level of a class and are basically variables that can store values “attached” to the class. They are used internally by the scrapy.Spider that we subclassed earlier and Scrapy mechanics in general.

Let’s go through them:

But which URL do we need to start on? Well, we need a list of movie names from our local cinema. So what I did was simply visit my local cinema’s website, find the page which displayed listings for my local branch and then took the URL of that page. This is the URL you see above and you can visit it here.

This method called parse is attached to the spider class but fear not, if you’re not clued up on classes and methods yet you can just think of it as a function, a grouped bit of code that takes inputs and returns outputs. In this case, the inputs are self, which will be the class instance itself and which we can ignore for now, and more importantly response which is the response object we talked about earlier. This object has been contstructed by Scrapy visiting the start_url we gave it and contains all the data we need to extract our film names. The very first line of the method does this in fact, so let’s investigate..

Diving into the HTML

The following paragraphs assume you are using Google Chrome as your browser; but if you’re not - there will be similar tools in your browser.

When Scrapy visits the start_url, it sends an HTTP request; the server hosting the cinema site receives this request, generates the page of HTML and then returns an HTTP response. If you need to visualise this, you can think of both requests and responses as large bundles of text that travel across the internet’s cables. When Scrapy gets the HTTP response back, it parses it in the background and creates the Scrapy response object which then gets sent to our parse method.

With that little bit explained - if you visit the page in question in your browser, then right click and “view source” you will see the magical code which makes up the web: HTML. At the moment you can think of it as a wall of bricks, and we’re going to “selectors” to extract the bricks we want. Selectors are just text and come in a variety of formats that you will read about: XPath and CSS being the two most popular. Today we’re going to use CSS because I believe it is the better investment to learn for the beginner. You can pause for a bit to read why with that article if you like.

The steps to finding the code in this jargon are:

This is the chunk of HTML we are interested in, you can see “The Conjuring 2” as the movie name inside the <a> element.

But how do we extract it? With a CSS selector! Let’s look at the one in our code:

The selector is the string being parsed to the response.css method. I won’t go in depth into CSS selectors here as that’s a huge topic for another day but I will explain what this one does:

movie_names is now a list of movies we can later lookup!

We then loop through this list of movie names, create a dictionary for each and then yield them. yield is a keyword in Python which I won’t go into now but can be thought of in the same light as return in its most basic sense. We construct a Python dictionary rather than just returning the string itself so that we can adapt this later to return extra information about the film (this will make sense in the challenges part later..)

Now we need to test the thing gets the data we want..

Scrapy has the functionality to run individual spiders if you pass it the filename and the “runspider” declaration. If you run this, you will see a bunch of debug logging output and hopefully see it finding a bunch of scraped items. In the background, because we supplied the -o movies.json parameter, it also saves all the results to a JSON file of that name. If successfully ran, the contents will look similar to this:

That’s it! We have the file we need to create the next part.